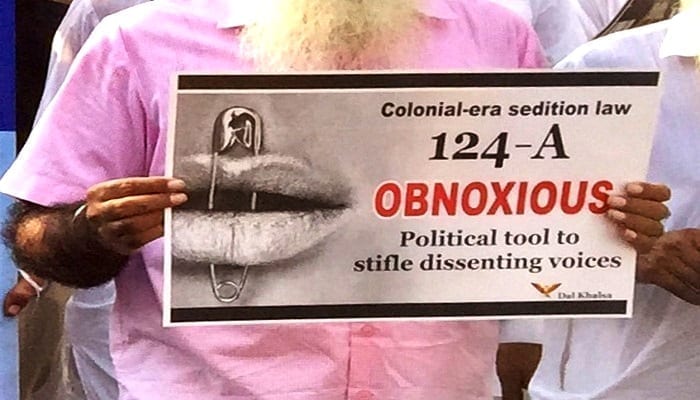 By Sushil Silvano, Our Special Correspondent, Copy Edited By Adam Rizvi, TIO: Sedition is likely to dominate all public debate in the country in the coming days.  Mahatma Gandhi had called Section 124A “the prince among the political sections of the IPC designed to suppress the liberty of the citizen”. India’s first Prime Minister Jawaharlal Nehru said that the provision was “obnoxious” and “highly objectionable”, and “the sooner we get rid of it the better”.

But in July 2019 Nityanand Rai, minister of state for home affairs, told the Rajya Sabha that “there is no proposal to scrap the provision under the IPC dealing with the offense of sedition. There is a need to retain the provision to effectively combat anti-national, secessionist, and terrorist elements.”

The week starting May 31 saw the spotlight focussed firmly in the Supreme Court on the obnoxious, horrendous, and oppressive Law of Sedition. Not one but two sedition cases against journalists–Vinod Dua, veteran journalist and TV commentator and newsmen belonging to two Telugu TV channels— TV 5 and ABN Andhrajyoti — kept the SC engaged and engrossed in the very serious consequences of Section 124A ( Sedition) and its effects on the larger issues of Freedom of Expression and Freedom of the Press, which are guaranteed by the Constitution of India.

Incidentally, Sedition is not part of the Constitution. Yet, it persists in the Indian Penal Code.

The Supreme Court on May  31 observed that ” It’s high time we define what sedition is. Criticising the government can’t be termed sedition,” the apex court said.

The observation was made by a three-judge Bench, headed by Justice D.Y.Chandrachud, hearing a plea related to sedition charges brought up against the two Telugu news channels.

The Andhra Police had registered an FIR under Section 124A of the Indian Penal Code, which criminalises sedition, against TV 5 and ABN Andhrajyoti for airing “offending speeches” made by YSR Congress lawmaker, Kanumuri Raghu Rama Krishna Raju.

The FIR was an attempt to ‘muzzle electronic media’ and ‘violate freedom of the press.

The channels, in their plea, had sought quashing of the FIR, saying that act of broadcasting speech by a sitting MP cannot be seditious.

The apex court said that Section 124A requires detailed interpretation with respect to its application to media and freedom of the press.

“We are of the view that provisions of 124A and 153 of IPC require interpretation, particularly on the issue of the rights of the press and free speech,” Justice DY Chandrachud, remarked.

The court directed the Andhra Pradesh government not to take any coercive action against the two news channels in the matter.

“The germane of an allegation arises from the certain program which was broadcast involving the participation of Kanumuri Raghu Rama Krishna Raju. The FIRs do not establish the offense invoked against them. Article 32 jurisdiction has been invoked saying our earlier order stated that contempt would be issued if the coercive arm of the law is used against free speech.

On May 4, the Supreme Court quashed the sedition case registered against Vinod Dua in Shimla, Himachal Pradesh last year. The case was filed by a local BJP leader in Himachal Pradesh over his YouTube show.

A bench of Justices U U Lalit and Vineet Saran had on October 6 last year reserved the verdict on his petition after hearing arguments for Dua, the Himachal Pradesh government, and the complainant in the case.

On the issue of protection of freedom of speech and expression of media personnel, the SC unambiguously said, “Every journalist is entitled to protection under the Kedar Nath Singh judgment (the famous verdict of 1962 on the scope and ambit of the offense of sedition in the IPC).”

While upholding the validity of section 124A (sedition) of the IPC, the top court in 1962 had ruled the sedition charges could not be invoked against a citizen for criticism of government actions as it would be in conformity with the freedom of speech and expression.

Dua was charged under sections 124A (sedition), 268 (public nuisance), 501 (printing matter known to be defamatory), and 505 (statements conducive to public mischief).

The BJP leader claimed that Dua made bizarre allegations on his 15-minute YouTube show on March 30.

The complainant had alleged that the journalist accused Prime Minister Narendra Modi of using “deaths and terror attacks” to get votes.

In recent years, Sedition and UAPA have been weaponized and used routinely against critics of various ruling governments.

OUT OF 96 SUSPECTS ARRESTED UNDER THE CHARGES OF SEDITION IN 2019, ONLY TWO MEN HAVE BEEN CONVICTED, AND NO WOMAN.

Another important difference is in the age profiles of those arrested. Most numbers of arrests under sedition charges in 2019 were in the 18 to 30 age group at 55 including one female.

Karnataka had recorded the maximum number of sedition cases in 2019 at 22, followed by Assam (17), Jammu & Kashmir (11), and Uttar Pradesh (10). While J&K was under President’s rule then, the other three states were being ruled by BJP.

NCRB said the West Bengal government did not provide the data for 2019.

The number of arrests under charges of sedition and Unlawful Activities Prevention Act (UAPA) was high last year as well, though NCRB data is not available yet.

In 2018, the Law Commission in a report on sedition had observed: “While it is essential to protect national integrity, it should not be misused as a tool to curb free speech. Dissent and criticism are essential ingredients of a robust public debate on policy issues as part of a vibrant democracy. Therefore, every restriction on free speech and expression must be carefully scrutinized to avoid unwarranted restrictions.”

As per the NCRB report, for cases under trial, 21 were closed due to insufficient evidence or no clue while two were categorized as false and six cases were found to be a dispute of civil nature, based on the final report submitted by the police before the courts.

What is Sedition law?

Section 124A of the Indian Penal Code (IPC), which deals with sedition, was drafted by Thomas Babington Macaulay and included in the IPC in 1870.

Sedition is a non-bailable offense. Punishment under the law varies from imprisonment up to three years to a life term and fine. A person charged under this law can’t apply for a government job. They have to live without their passport and must present themselves in court as and when required.

Once forgotten, the verdict in Kedar Nath Singh v State of Bihar (1962) has become a landmark judgment.

In 1953, Kedar Nath Singh, a member of the Forward Communist Party from Bihar, got into trouble after he took on the ruling Congress during a rally at Begusarai, where he said, “Today, the dogs of CBI are loitering around Barauni [in Begusarai]. Many official dogs are sitting even in this meeting. The people of India drove out the British from the country and elected these Congress goondas to the gaddi. As we drove out the British, we shall strike and drive out these Congress goondas as well. They have today established a rule of lathis, bullets in the country. We believe in a revolution which will come, and in the flame of which, capitalists, zamindars, and Congress leaders will be reduced to ashes, and on their ashes will be established a government of the poor and the downtrodden people of India.”

The fiery speech led to his conviction and imprisonment by a first-class magistrate on sedition charged, and an appeal to the Patna High Court was struck down.

THEN IN 1962, AN APPEAL BY SINGH CAME BEFORE THE SUPREME COURT, IN WHICH HE QUESTIONED THE CONSTITUTIONAL VALIDITY OF SECTION 124A, CONTENDING IT STIFLED HIS RIGHT TO FREE SPEECH UNDER ARTICLE 19 OF THE CONSTITUTION.

The top court had its task cut out since it had to lay down the law in the face of two directly conflicting interpretations of Section 124A by British-era courts. The two previous judgments, one from 1942 and the other from 1947, expressed contradictory views on whether incitement to violence or a tendency to disturb public order was a necessary ingredient of the offense under Section 124A.

And, what did the Supreme Court rule?

In a landmark verdict, a Constitution Bench of the top court upheld the validity of section 124A (sedition) of the IPC but also attempted to restrict the colonial-era law’s scope for misuse by trying to demarcate the difference between which acts amounted to sedition and which ones did not.

It said that any act that had the “effect of subverting the Government” by violent means or creating public disorder would come within the definition of sedition. It also upheld Section 505 (statements conducive to public mischief) as constitutionally valid.

“Acts within the meaning of s. 124A which have the effect of subverting the Government by bringing that Government into contempt or hatred, or creating disaffection against it, would be within the penal statute because the feeling of disloyalty to the Government established by law or enmity to it imports the idea of a tendency to public disorder by the use of actual violence or incitement to violence. In other words, any written or spoken words, etc., which have implicit in them the idea of subverting Government by violent means, which are compendiously included in the term ‘revolution’, has been made penal by the section in question,” ruled the top court.

However, the court ruled that disapproval of the measures of government with a view to their improvement or alteration by lawful means is not sedition. It held that “comments, however strongly worded, expressing disapprobation of actions of the Government, without exciting those feelings which generate the inclination to cause public disorder by acts of violence” would not attract the penal offense.

The court added that “commenting in strong terms upon the measures or acts of Government, or its agencies, so as to ameliorate the condition of the people or to secure the cancellation or alteration of those acts or measures by lawful means, that is to say, without exciting those feelings of enmity and disloyalty which imply excitement to public disorder or the use of violence”, is not sedition.

“A citizen has a right to say or write whatever he likes about the Government, or its measures, by way of criticism or comment, so long as he does not incite people to violence against the Government established by law or with the intention of creating public disorder,” it further maintained.

Will the two Supreme Court judgments on Sedition sober down the power-drunk state administration? 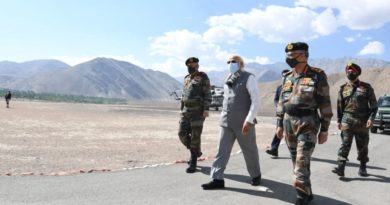 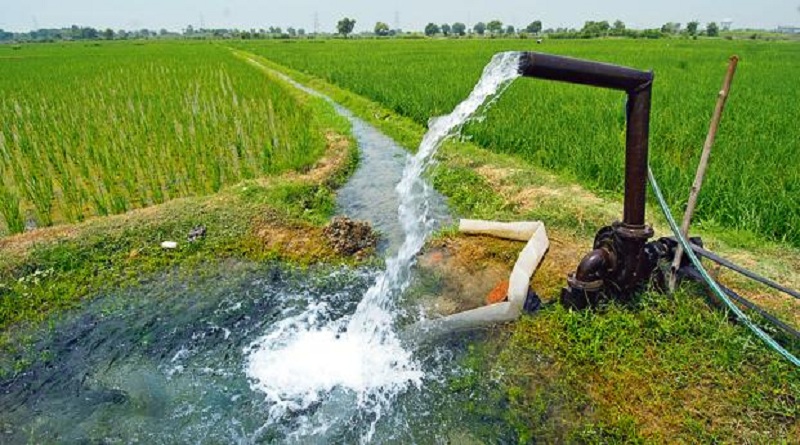 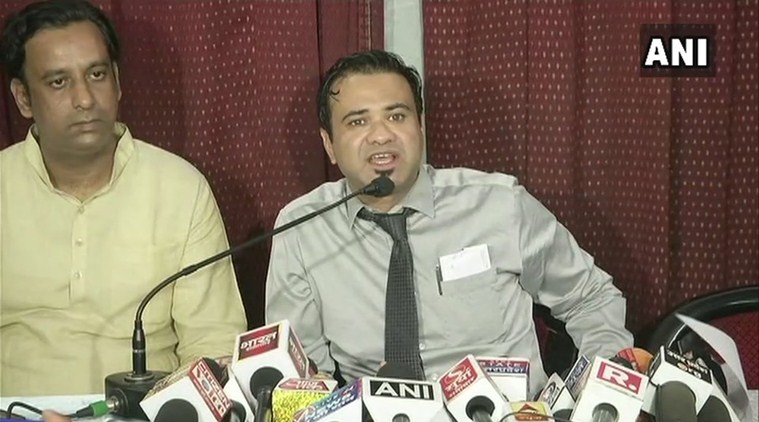