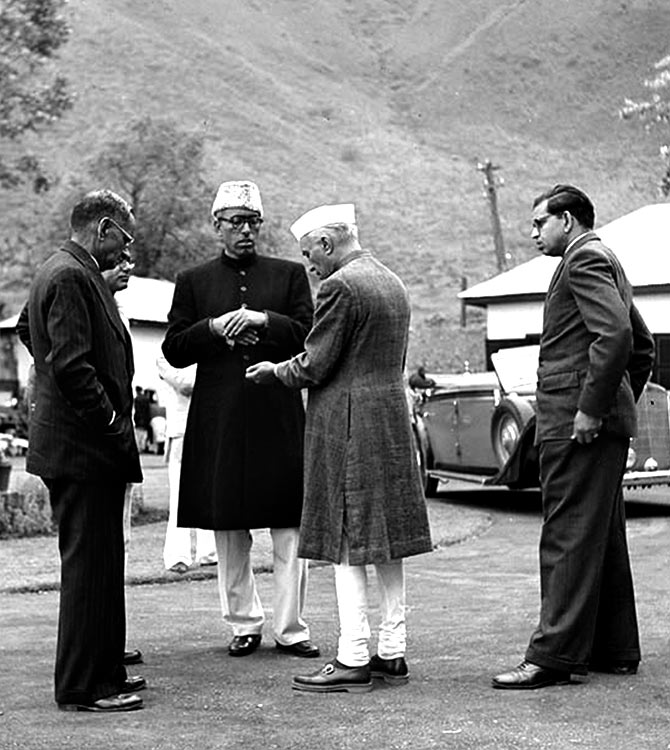 ‘Aggravated fears about the fate of Article 370 and Article 35A of the Constitution have reopened old wounds and laid bare the widening emotional distance between Srinagar and New Delhi,’ says Mohammad Sayeed Malik, the distinguished commentator on Kashmir affairs.

The cascading, ghastly, fallout of Sheikh Abdullah’s undemocratic, unconstitutional and morally indefensible dismissal from power on August 9, 1953, has never before been as ominously close, and as crucially relevant, to the contemporary scene in Jammu and Kashmir as it is now, 65 years later.

Surcharged feelings of deep concern, resulting from aggravated fears about the fate of Article 370 and Article 35A of the Constitution of India, have reopened old wounds and laid bare the wide — and widening — emotional distance between Srinagar and New Delhi, as also between the Kashmir and Jammu regions, with all its undesirable concomitants.

It has compounded an already tenuous ground situation and is fuelling fears over attempts at re-opening ‘settled issues’ related to the demographic character of India’s only Muslim-majority state.

Recent developments on this front have agitated the minds of the local population across the board and cut across political and ideological lines.

It is reviving six-decade old dark memories of a brazen assault on the most visible face of safeguards guaranteeing J&K’s special Constitutional status within the Indian Union.

Sheikh Abdullah’s arbitrary removal as duly elected prime minister of the state in 1953, an unimaginable proposition until that moment and its crude follow-up over the years and decades, has eroded mutual faith underlying the Accession.

It was on that fateful day that the state’s tallest; most popular, most respected leader was literally dragged down from his high public pedestal and pushed behind bars to humiliate him.

Erosion of the state’s Constitutionally guaranteed internal autonomy has gone on unabated since then. Today, that framework looks all but hollow from inside.

Kashmiris were stunned by this arrogant display of might in 1953. Over half a century later, those feelings are now compounded by frustration over the calculated indifference on the part of those ostensibly committed to ‘win hearts and minds’ of the people of Kashmir.

Each passing day strengthens the impression that such platitudes have disappared from the rulers’ lexicon. In its place, one only hears narrowly crafted exhortation around the ‘national interest’.

And that vacuous refrain has become a convenient excuse for evading political as well as moral obligations, whether related to moderating the humanitarian fallout of security and counter-insurgency operations, creating space for wider political engagement or responding to the popular urge for the state’s open commitment to uphold and intervene in defence of Constitutional safeguards like Article 35A and Article 370.

Instead, the border state was denuded of its normal Constitutional arrangement and burdened with an avoidable political vacuum resulting from the Bharatiya Janata Party’s abrupt unilateral withdrawal from the Peoples Democratic Party-led coalition and imposition of governor’s rule in June.

Till the last moment, the BJP’s declared position was that in a sensitive border state like J&K even the worst political arrangement was better than a vacuum at the top.

It was way back in 1953 that the terminology (of the ‘supremacy of the national interest’) was employed for the first time, to camouflage the brazen assault on popular aspirations rooted in the Accession that itself was conceived and marketed as ‘an act of mutual faith’.

With the passage of time this high-handed attitude became the norm in dealing with men and matters in Jammu and Kashmir.

Change in the political and/or ideological complexion of the power structure in New Delhi made only a marginal difference in its style of ‘handling Kashmir’, not in its substance.

Until he was forcibly ejected from power and thrown behind bars in 1953, Sheikh Abdullah was paraded and exhibited — nationally as well as internationally — as the symbol of the moral legitimacy of J&K’s Accession with the Indian Union, achieved against the (communal) run of events on the subcontinent in 1947.

In one fell swoop, just six years later, that pedestal of mutual faith was brought down and, step by step, hammered into pieces. Its symbol was unceremoniously ejected and consigned to the political wilderness.

The net result has been the steady disenchantment with mainstream politics and the depleting stock value of its practitioners. Ironically, it is this segment that symbolises the ‘face of India’ in the Kashmir context.

The treatment meted to that lot, from Sheikh Abdullah to Mehbooba Mufti (though mutually incomparable), conveys a message that has not been lost upon the people of the state.

So much so that when Sheikh Abdullah finally came round to ‘returning to the national mainstream’ (an euphemism for his restoration to power) after 22 years in the political wilderness it was on New Delhi’s humiliating terms dictated in the 1975 Kashmir Accord.

His return to power came with a huge price tag — for him and his legacy.

Sheikh Abdullah’s progeny was left to continue paying that heavy price. Two succeeding generations of them now know it at their cost.

Aatish-e-Chinar, Sheikh Abdullah’s autobiography, makes no secret of his deep sense of hurt and betrayal on this account. And why not?

He certainly deserved a better deal for jettisoning his (plebiscite) plank. During his lifetime, his own tall stature enabled him to withstand every setback and survive largely unscathed.

But after his death in 1982, it took hardly any time for accumulated estrangement and anger to burst into the open.

Sheikh Abdullah got nothing in hand to pass on to his progeny to sell down the line and today his successors are paying the price. The National Conference is a pale image of its old self; shrunk in size and influence.

Sheikh Abdullah was thoroughly disillusioned and bitter. Worse, he felt cheated by those he had trusted all his life — the Congress leadership.

This cascading fallout of 1953 is one of the root causes of disillusionment at the mass level and its unmanageable consequences on the ground.

Aggravated alienation offers an ideal breeding ground for inimical, irrational, responses. No end to local youth taking up the gun, notwithstanding its mounting human cost to society.

Political indifference at the top (in New Delhi) is breeding hopelessness and frustration across the board with all sorts of ominous offshoots.

One needs to just move around interior parts of the Kashmir valley to feel the pulse of the people. Cumulative chemistry of two (post-Sheikh) generations, rooted in the hurt Kashmiri psyche, makes them vulnerable to radicalisation.

The sense of hurt and humiliation triggered off on August 9, 1953 has gained fresh momentum, quite ominously.

The trend towards making common cause, across the ideologically divided local political spectrum, over sensitive basic issues is its new offshoot.

Rarely in the past have pro-Accession and anti-Accession forces in Kashmir found it politically or personally convenient to close ranks over an issue that intrinsically pertains to the provisions of the Constitution of India (separatists avowedly disclaim allegiance to the Constitution).

But the storm over New Delhi’s indifference towards the fate of Article 370 and Article 35A has sucked them all together, in an apparently now-or-never sort of combat.

For the moment, the Accession is no longer the Line of Demarcation.

The trajectory of August 9 reveals its ultimate reality even though the dark secret of its original plot remains largely shrouded in mystery, like that of the mysterious theft and recovery of the Holy Relic from the Hazratbal shrine in 1963 that turned out to be as good a political earthquake.

None of the main actors of August 9 including the hero of its tragedy — Sheikh Abdullah — has so far told the whole truth. That is why 65 years after the event in 1953 it is impossible to complete the picture of the (original) plot. There are vital missing links in everyone’s account.

Back in 1947, Sheikh Abdullah’s admirers hailed him for swimming upstream and playing a key role in his state’s Accession with the Indian Union. It was hailed as his ‘momentous achievement’. However, by 1953 it was the turn of his detractors to dub it as his ‘monumental blunder’.

The crux of Sheikh Abdullah’s legacy, however, lies somewhere between these two conflicting perceptions.

New Delhi’s high-handed action to oust and imprison Sheikh Abdullah in 1953 eventually turned out to be a bad bargain in the long run: Undermining India’s moral legitimacy in its Kashmir case for the sake of a questionable political gambit to artificially force the pace of the state’s ‘integration’ with the Union and ‘managing’ (manipulating?) its local affairs.

Between 1947 and 1953, Sheikh Abdullah was exhibited on the world stage as the living symbol of India’s moral legitimacy in Kashmir.

However, the inverted logic of 1953 dictated the loss of that moral high ground.

No doubt that Sheikh Abdullah’s relationship with New Delhi towards the fag end of his first innings (1947 to 1953) was fouled by mutual distrust over various issues including that of the demarcation of Centre-state relations in the context of India’s commitment to Maharaja Hari Singh on greater internal autonomy for his state.

Even so, the Delhi Agreement of 1952, laying the foundation for a broad framework of distribution of powers between Srinagar and New Delhi (in terms of Article 370 of the Constitution of India) was concluded with Sheikh Abdullah at the helm.

The job done, Sheikh Abdullah found himself thrown behind the bars shortly thereafter.

Today, when the existence and Constitutional legitimacy of the very same Article 370 (and Article 35A) is being challenged bitter old memories are coming alive.

Now that the ground situation has come to that where the Laxman Rekha (of Accession), demarcating the local political arena, has been rendered obscure, New Delhi can afford to ignore its potential implications only at the peril of the country’s larger interests in this sensitive border state.

Lead image courtesy Rediff.com: Sheikh Abdullah with Jawaharlal Nehru in this 1948 photograph. Five years later, the Nehru government dismissed the Abdullah government. Kashmir has not been the same since.
The article first appeared in rediff.com

Mohammad Sayeed Malik is a veteran journalist and a distinguished commentator on Kashmir affairs. 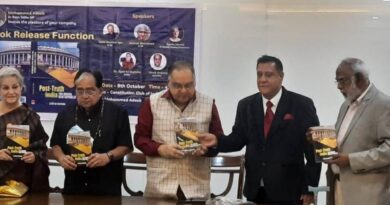