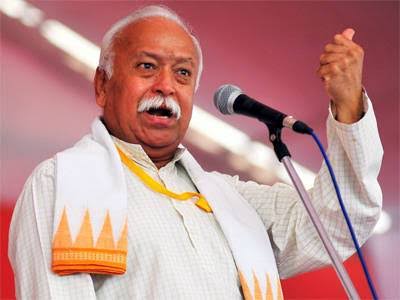 Bhagwat stated that his outfit could prepare military personnel within three days which the Army would do in six-seven months. 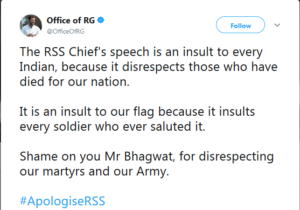 Leaders of the ruling Bharatiya Janata Party have huddled in support of the leader of the ultra right outfit Rashtriya Swayamsewak Sangh (RSS) Mohan Bhagwat, blaming the press for “twisting around” his statement related to the Indian Army.

On Sunday Bhagwat is said to have stated his outfit, the RSS, could prepare to fight for the nation in three days, while the Army would need six-seven months.

Minister of State for Home Affairs, Kiran Rijiju has tweeted, “Indian Army is our pride. In emergency situation (not Congress emergency) every Indian must volunteer to stand with Defence Forces. Bhagwat ji only said it takes 6-7 months for a person to be a trained soldier & if Constitution permits RSS cadres has the ability to contribute.”

Kerala Chief Minister Pinarayi Vijayan wrote on Facebook, “RSS chief Mohan Bhagwat’s comments on Indian Army are in poor taste, against Constitutional propriety; confirms our worst fears about the Sangh that it has no respect for India’s institutions. His statement exposes RSS’s hidden agenda to float parallel militias to wreak havoc, crush national unity. RSS wants to turn India into Mussolini’s Italy and Hitler’s Germany. Parallel Army he is talking about is what we have always warned against: Hindu Terror. Running down the army amounts to treason. RSS chief must apologize to the people of India for this treacherous remark. PM Mr. Narendra Modi should clarify his Govt’s position over Bhagwat belittling Indian Army.” 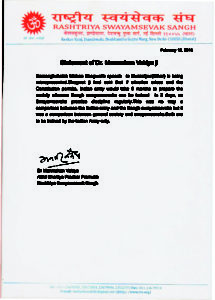 In the wake of the controversy the RSS has released a press statement terming misrepresentation of comments. “Mohan Bhagwat’s speech in Muzzafpur (Bihar) is being misrepresented. Bhagwat ji had said that if situation arises and the Constitution permits, Indian Army would take six months to prepare the society whereas Sangh Swayamsevaks can be trained in three days, as Swayamsevaks practice discipline regularly. This was no way a comparison between the Indian Army and the Sangh Swayamsevaks but it was a comparison between general society and Swayamsevaks. Both are to be trained by the Indian Army only.” 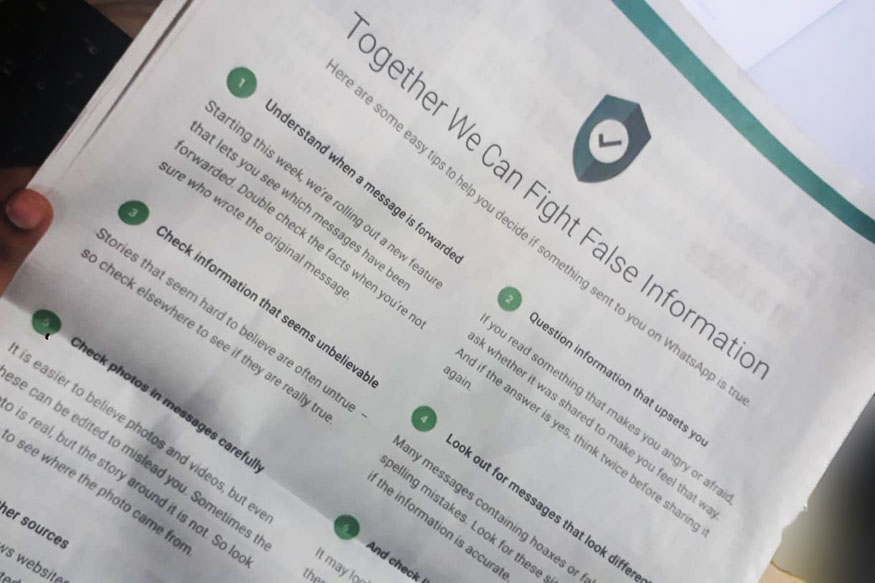