By Vijaylakshmi Nadar, The India observer, TIO, NJ: The majority of the Indian diaspora in New Jersey, who do not believe they have to follow the saffron right wing  Hindutva ideology to feel any more or less Indian than they already are, won a major victory on August 30. After more than two weeks of protests on every available platform, they received a much needed apology from the  Indian Business Association (IBA). The reluctant apology came in after pushback from several quarters including local leaders for bringing in a  bulldozer, viewed as an instrument of oppression, besides the virulent spokesperson of the Bharatiya Janata Party (BJP) Dr. Sambit Patra at the Independence Day parade, in Edison, New Jersey on August 14.

The world views India as a land of diversity, following several religions, languages and cultures. An independence day celebration of the home country on foreign soil is expected to be an inclusive affair and not doing so is not only unIndian but also unAmerican as well, according to sentiments expressed by the protestors.

Many felt targeted and excluded from the celebrations, when they spotted a bulldozer at the parade, reassembling after three years of the covid outbreak . To make matters worse, there were posters of the Indian prime minister Narendra Modi and the chief minister of Uttar Pradesh (UP) Yogi Adityanath, both of whom have unleashed a tyrannical rule and created an atmosphere of extreme fear in states where Bharatiya Janata Party (BJP) holds sway. Instead of a Mahatma Gandhi or a Jawaharlal Nehru, whom the world recognises as Indian leaders.

Both Modi and Adityanath, belonging to the BJP have unleashed a divisive agenda. It is traumatic but understood that the reign of terror, which has resulted in a 400% increase in crimes against the minority in just eight years, would continue till this fascist party is thrown out of power electorally.

To many then, the bulldozer is not a symbol of law and order as claimed by the Hindutva followers   but one of fear and oppression especially for the minority community whose businesses, homes and places of worship have been razed back home by a fascist regime, in the run up to transform a  secular nation, into a not so secular ‘Hindu Rashtra’, the land of the majority.

The thought that the instruments of oppression used by the power drunk political party in India, would also be used here to entertain a section of the diaspora and denigrate the other with impudence, with no fear of repercussions of any sort is beyond comprehension.

Brandishing saffron everywhere, inviting BJP politicians who gained notoriety for targeting the minority, to the parade, brandishing  images of Hindu gods and goddesses with chants of Jai Shri Ram, a war cry against the minority in India, in an inclusive event was barely being tolerated when  the bulldozer became a trigger point and the dissent became shrill enough for the local politicians to take cognizance of.

Both the president of the Edison township council, Joseph A Coyle and the vice president Joyce Ship-Freeman, came heavily on the IBA for this brazenness, refusing to accept their argument that the bulldozer was a symbol of “development” and “law and order”.

The tactics used by the Hindutva regime in India, to paint the ones oppressed and therefore opposting in India as the “disruptive” elements, was attempted here too when council member Ajay Patil and an office bearer of the IBA, argued against the opposing group bringing in Indian politics here, disregarding the fact that “bringing in politics” is exactly what IBA had done and the protests were a consequence of that.

In India, the BJP regime would reign in the protestors, beating them mercilessly, throwing them in jail without a trial, or bulldozing their homes and businesses. But for the fanboys of the destructive Hindutva ideology here, indulging in anything remotely divisive could land them in trouble. So while the president of IBA Chandrakant Patel turned up a defiant nose on August 22, refusing to apologize, quietly delivered a statement of apology a week later, under fear of repercussions from the township  council.

The apology letter addressed to mayor Sam Joshi of Edison and mayor John McCormac of Woodsbridge, the two townships, through which the parade, with the offensive bulldozer passed, is a huge breakthrough in the fight against Hindutva. The offensive attacks launched by the Hindutva groups operating in the US as well, whether it is the Hindu Swayam Sevak (HSS), the international wing of the Rashtriya Swayam Sevak (RSS), the Overseas Friends of BJP (OFBJP), the World Hindu Council, the international wing of the Vishwa Hindu Parishad (VHP) or the Hindu American Foundation (HAF), and their many subsidiaries, has been steadily rising.

Only around 30-35% of the Hindus identify with Hindutva, but they are a committed lot, pushing for growth and constant recognition.

On August 22, several organizations battling against Hindutva for years, like the Council on American-Islamic Relations (CAIR), the Indian American Muslim Council (IAMC), addressed a press conference to call on local leaders to rebuke the offensive use of the  bulldozer, which “in India symbolizes societal division and anti-Muslim sentiment” and an apology from the IBA.

The fight continued in the Edison township council on the same day, at which many elected officials, who were present at the parade, including Middlesex County commissioner Shanti Narra and Sam Joshi, denounced the spectacle of the bulldozer during the parade. Shanti Narra also stated he had spoken to many in the diaspora including Indian muslims, christians, jews and a majority of Hindus, all of whom were disturbed by the symbolism of the bulldozer. “This is clearly giving a message of intimidation to American Indian Muslims and other minorities saying ‘We are here, we are in control and you can’t do anything, even in America,” stated Dylan Terpstra, operations coordinator at CAIR.

At the council meeting, Terpstra drew a comparison on how the bulldozer served to fear monger Muslims the same way the Black community faced intimidation with the symbol of the noose throughout history, which struck a chord with Joyce Ship-Freeman.

“Had it been the noose, would we all have been walking behind it and following it ? No, ”Ship-Freeman voiced. “This is not the Edison we should accept. We should all stand out against it because if it’s on one group today, it will be on another group tomorrow.” Ship-Freeman also spoke directly to the organizers of the parade, reputed to be the Indian Business Association, demanding them to come forward and take responsibility. This is what caused the camel to finally bend and realize this is the US not UP.

CAIR while accepting the apology and acknowledging the role played by mayor McCormac for taking the issue seriously and for calling on the IBA to issue the apology stated, “the bulldozer is a symbol of intimidation and support for the oppression of minorities in India. Such hateful symbols have no place on our streets”.

Mayor McCormac also plans to also establish an advisory committee with the objective to ensure that the IBA’s stated commitment is maintained. 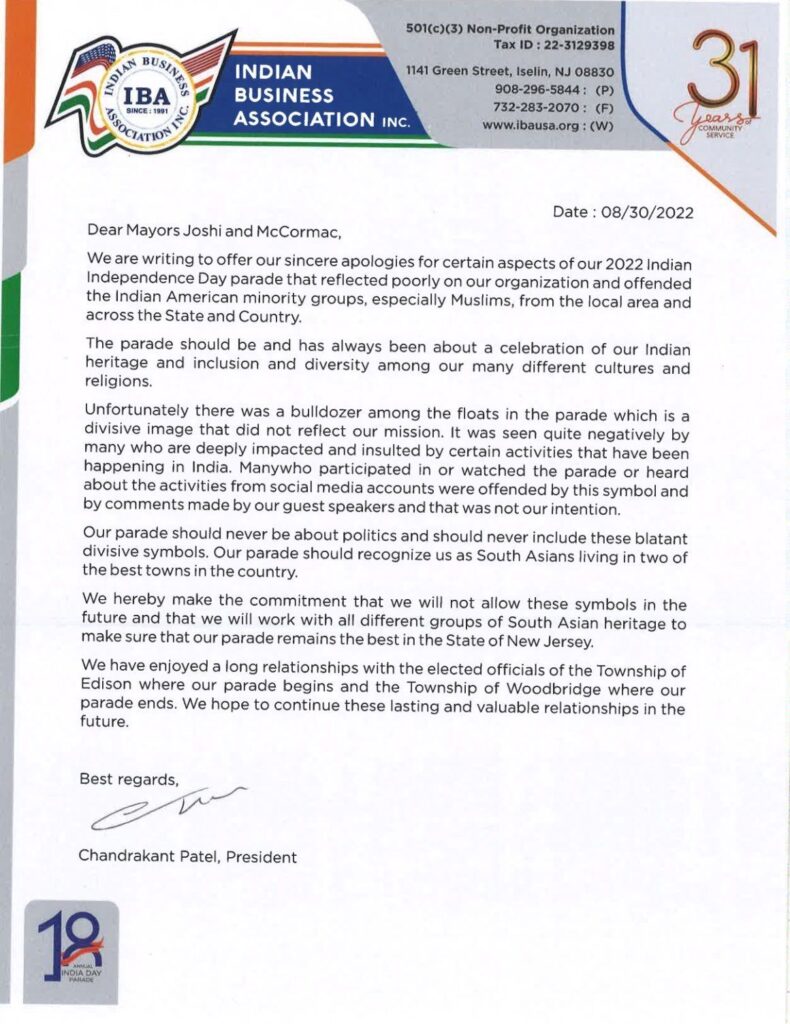 Also, Read more from this Author: Americans Decry Dehumanization of Hijab in India!! 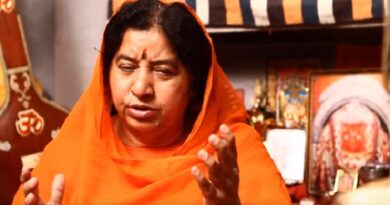 Hussaini Brahmins- Half Hindu and Half Muslim 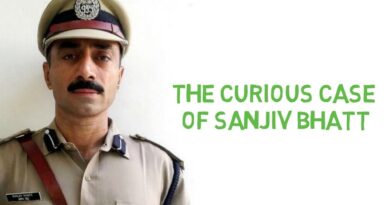