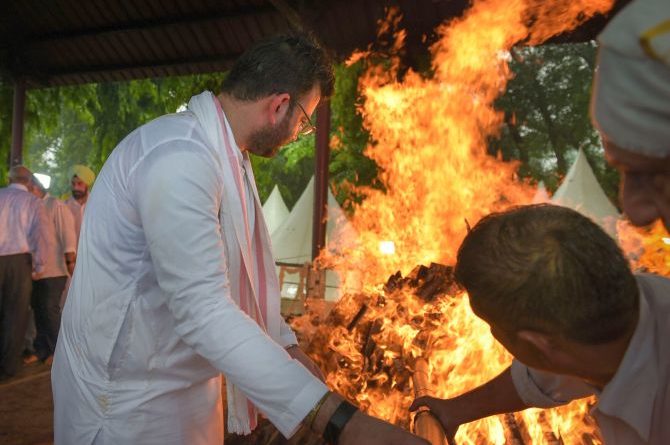 BJP workers and mourners queued up in large numbers outside the party headquarters since morning to pay their last respects to the leader.

New Delhi, August 25, 2019: Former finance minister Arun Jaitley was cremated at Nigambodh Ghat in New Delhi with full state honours on Sunday as scores of his admirers, Bharatiya Janata Party workers and top leaders from across the political spectrum paid their last respects. 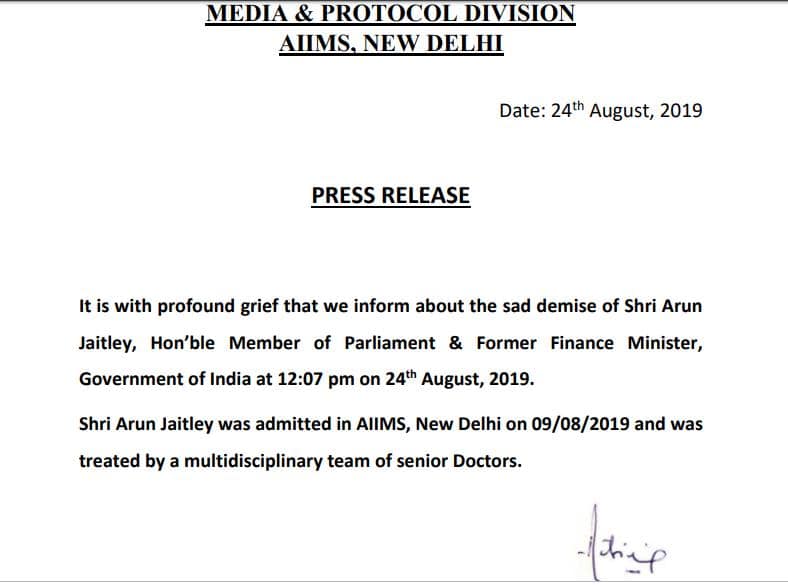 The skies opened up as Jaitley’s son Rohan lit the pyre amid chanting of Vedic mantras.

Hundreds of mourners, who converged at the cremation ground along the banks of the Yamuna, bid a tearful adieu to the BJP stalwart who passed away on Saturday at the age of 66.

Senior leaders laid wreaths on the mortal remains and a gun salute was given before the last rites.

Unmindful of the heavy rains, the people stood on their heels, cheek by jowl to have a last glimpse of the leader.

While some were sheltered by the tents erected on the premises, leaders like Nitish Kumar, Piyush Goyal, Kailash Vijayvargia, Prakash Chandra Sarangi, and Prakash Javadekar got drenched.

A visibly emotional Naidu, who had worked closely with Jaitley in the BJP, stood with folded hands for several minutes near the body.

Prime Minister Narendra Modi, who is on a foreign visit, on Saturday paid an emotional tribute to Jaitley, saying he cannot imagine he was far away in Bahrain when his “dear friend” and party colleague passed away in New Delhi.

Recalling Jaitley’s association with Gujarat, Rupani said the BJP would seek his advice on strategy whenever there was an election in the state where the party is in power for two decades.

“He has been a Rajya Sabha MP from Gujarat. We have won several elections in the state by working on his strategy. We will always feel his absence,” Rupani told reporters.

Union health and family welfare minister Harsh Vardhan said Jaitley’s death was an irreparable loss and he will always be remembered for his contribution.

Jaitley, who as finance minister piloted India’s biggest tax reform and flagship schemes like Jan Dhan, was the chief trouble-shooter of the BJP and the Modi government.

His death is another jolt to the ruling party after the demise of Sushma Swaraj, a contemporary of Jaitley and one of its prominent faces, on August 6 and Goa chief minister Manohar Parrikar in March this year.

Wrapped in the national flag, Jaitley’s body was brought at around 11 am to the BJP headquarters located on the Deen Dayal Upadhyaya Marg from his Kailash Colony residence.

BJP workers queued up in large numbers outside the party headquarters since morning to pay their last respects to the leader.

A steady stream of mourners — from party to common people including schoolchildren — filed past the body which was kept there for over two-and-a-half hours.

Party workers remembered Jaitley as a leader who always helped them when they were in need.

“I used to go to his house along with a party leader. He was a very decent and friendly person who hardly said no to any request for help by party workers,” said Dildar Hussain, a BJP worker from the Jama Masjid area.

A BJP worker from Girideeh in Jharkhand, Raj Kishore, who waited patiently outside the BJP office to pay homage to Jaitley, termed him as a “sober” politician who never hurt anyone with his words or deeds.

Similar sentiments were expressed by many party leaders and workers who thronged the BJP headquarters to pay homage to the departed leader.

As the body was taken to the cremation ground in a flower-decked gun carriage, slogans of Jaitley Ji Amar rahein (long live Jaitley) rent the air.

Shah, Nadda, Singh and other leaders followed the carriage in their cars from party headquarters to the Nigambodh Ghat.

Joginder Prakash, 70, recalled his association with Jaitley since the Emergency days.

Prakash said while he was jailed during the Emergency, his shop was demolished.

Jaitley later fought his case in the high court and did not charge a penny, he said.

H N Sharma also recalled how Jaitley helped get treatment for an ailing freedom fighter from Ballia at AIIMS and also arranged Rs 2 lakh for the family.

Several states, including Himachal Pradesh, Haryana, and Punjab, have declared a state mourning.

There will be civil war, blood bath because of NRC: Mamata 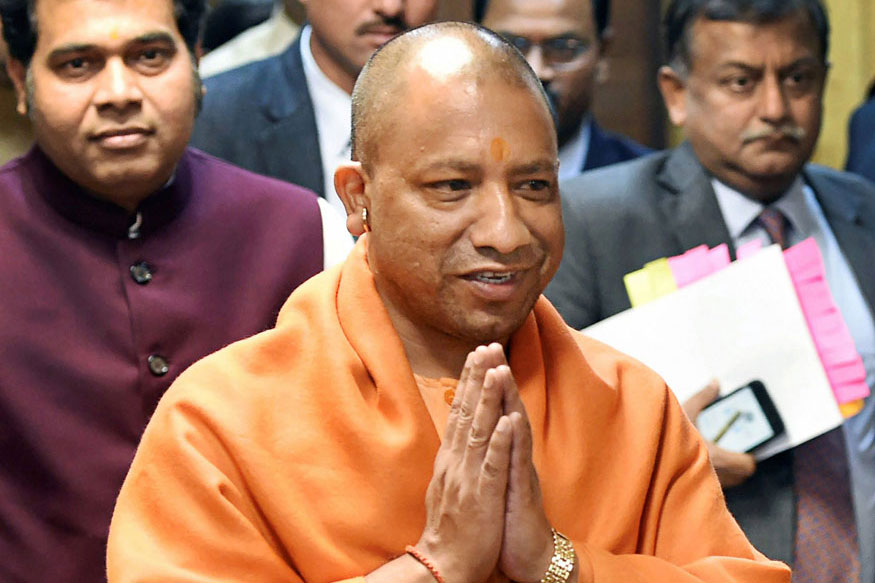 Petitioner in case involving UP CM says she is being threatened